WordStory | My Soccer + The Wounds it Left 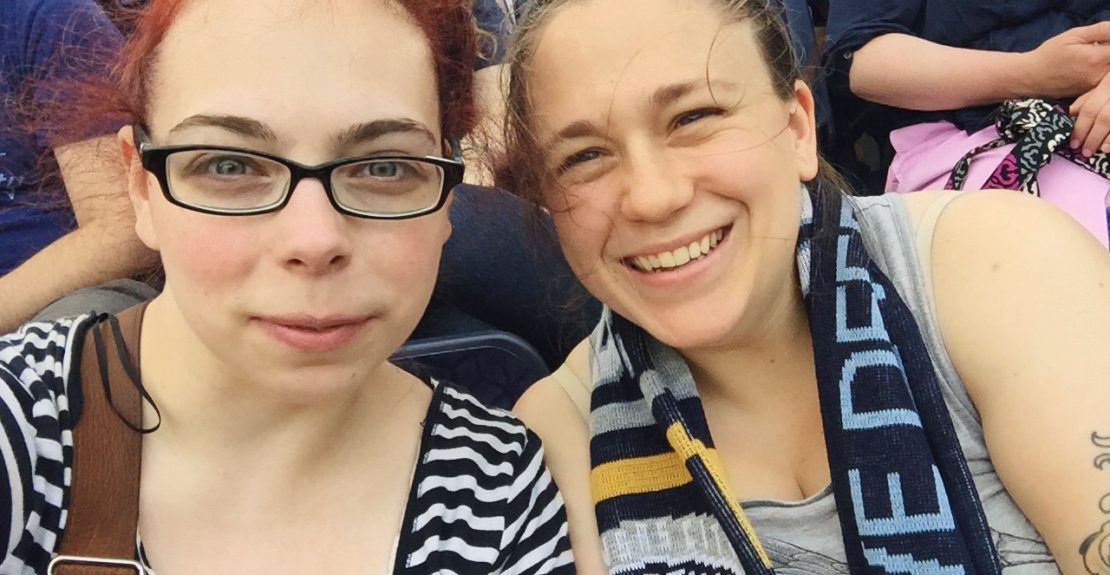 I’m a sports person. It might not seem like it at first…but if you stick around for a while, you’ll come to see the burning passion that exists right in my very bones. As an empath, my emotions can get extreme and I can become a very passionate person — especially when the right conditions exist — like when athletic humans perform at the absolute top level they can and then get to celebrate (Michael Phelps anyone?). Because sports make me super emotional, they’re something I tend to do privately. I’ve talked about my love for the New York Football Giants, I’ve created scrapbooks to commemorate the olympic games, but my real and true passion lies with American Soccer. Soccer, as a young girl, was the lens in which I understood the world.

When I was in grade school there were no local competitive teams for girls, so I joined our town’s boys travel soccer team. I was the only girl on the team and our coach Phil was an incredible human and taught me so much about the game and myself. Once middle school hit, it wasn’t really that much fun playing with the boys anymore — especially since I’m still only 5’1″ — so my dad founded the first competitive girls travel soccer team in our community. It is still one of the greatest gifts anyone has ever given me. Talk about feminism, right?

Growing up, soccer was fairly popular in my local area. I grew up in the Gateway Region of New Jersey, right outside NYC. There were Italian communities, Polish communities, Portuguese communities, Spanish communities, Scottish communities, and every other soccer-loving country you could think of.  In fact — 3 of the players on the US Men’s National Team from 1994 World Cup were from the town right next door. I’ll never forget the night my dad took me to see their homecoming. We stood out in the rain for hours with hundreds of other drenched American soccer fans. There’s just something magical about standing beside other star-spangled citizens, cheering for other humans and rooting for your country.

I bet my black and white Adidias eqipment bag is still in my parents basement, smattered with the sharpie ramblings of a tween. There was definitely some N’Sync & Backstreet Boys — and a lot of ‘i luv mike’ (which totally worked out, because I just switched back and forth between a couple of Mikes in middle school).

Alas, my soccer story does not have a happy ending. When I was 13 years old, my soccer world was pulled out from under me. In what the orthopedic surgeon would later call a ‘freak accident’, I sustained a devastating knee injury from which I’ve never fully recovered. After the original accident I was on crutches for 8 weeks and PT for an additional 6 weeks. When that wasn’t enough, the doctor said that surgery was our only option. So on March 5th, 1999 I went under the knife. When I woke up, I found out that the damage was much more severe than originally thought. Instead of a tear or pull — I had crushed the articular cartilage in my knee — down to the bone.

I look back now and think, “Thank god that everything happened the way it did, and where I was, and with some of the best orthopedic surgeons in the country” (thanks NY Football Giants). My surgeon performed a new type of surgery on my knee — Microfracture Surgery — in which they create small microfractures in the remaining cartilage so that blood can get in and help to create a hearty scar tissue that will act instead of the broken cartilage.

I was done playing competitive soccer.

Yes, I could still pick up a ball and play with my friends. Yes, I could still watch my favorite players put on their jerseys and play for club and country. Yes, soccer was not taken away from me. But my soccer was gone. I couldn’t go out and run for 90 minutes straight everyday. I lost my lens. I had to re-learn how to see the world and it made me feel broken. Sometimes it still makes me feel broken.

So when the US Women won the 1999 World Cup — it was so bittersweet for me. On the one hand, watching Brandi Chastain tear off her shirt after the last penalty kick — if that’s not one of my top ten feminist moments in the history of the world — it’s at least burned into my eyes and my heart for life. On the other hand, I felt like an outsider. I felt like I wasn’t really a part of this victory anymore. I felt lost.

Throughout high school and college I kept up my love of the game through club and country. Living only minutes away from the NY/NJ Metrostars made it easy to keep up with the game — and watching the US Men’s National Team (one day I’ll tell you about how I spent the entire US/Portugal game in South Korea hysterically crying in disbelief — or the time after the US beat Algeria in 2010 and I spent the entire drive into work screaming Don’t Stop Believing at the top of my lungs).

When I left for college, I was already pretty familiar with the campus — my dad had been taking me to Rutgers for years to watch their men’s and women’s soccer teams. It was our biggest soccer connection after I had hurt myself and it meant the world to me. So when the RU Women’s team got a new #10 my freshman year, a definite rising star, I was excited to watch her play.

I’ve followed Carli Lloyd’s career since then — and coming from a school like Rutgers — we don’t generally get to see our student athletes on the (inter)national stage any time after graduation (with the exception of a few notable NFL players). But this was different. This was a woman — this was soccer — this was the first time I watched a world cup away from home.

And damn if she didn’t kill it. Seriously though. She killed it. She scored that penalty kick against China and then just decided to be the best athlete on the pitch every single time.

THIS WAS THE WORLD CUP.

The pinnacle of everything that soccer is about. In. The. World.

And she killed it. She absolutely went out there and was the greatest soccer player in the world.

This woman — who’s career I’ve been following since my first day of University — she just went out there and gave one of the greatest athletic performances I’ve ever seen of any human. Ever.

I cannot even begin to tell you about all the feels. I’m sitting here crying just thinking about it again.

After last nights’ victory — especially after watching Abby Wambach run over to her wife after the game — I feel closer to the game again. I feel like it’s come full circle. Maybethat thing that had been torn away from me,that hole that’s been in my heart…maybe that wound is finally starting to close up.

Maybe instead of looking at it as being torn away never to fully heal, I can start to look at it as more of a pruning — like what you would need to do to a beautiful tree. In order to become the person I am today, that terrible, horrible, awful thing had to happen to me. But that doesn’t mean I need to keep my distance from the game I love so much. I love who I am today. I love the beautiful game. All of that can live together in harmony.

I feel so grateful to have this little part of me back in my life.

PS — If you’re interested in learning how to tell your own stories, come join us for Find Your Voice. My free six-week storytelling class is the perfect place to take that first brave step and get your stories out there. Learn more at http://rukristin.com/FindYourVoice