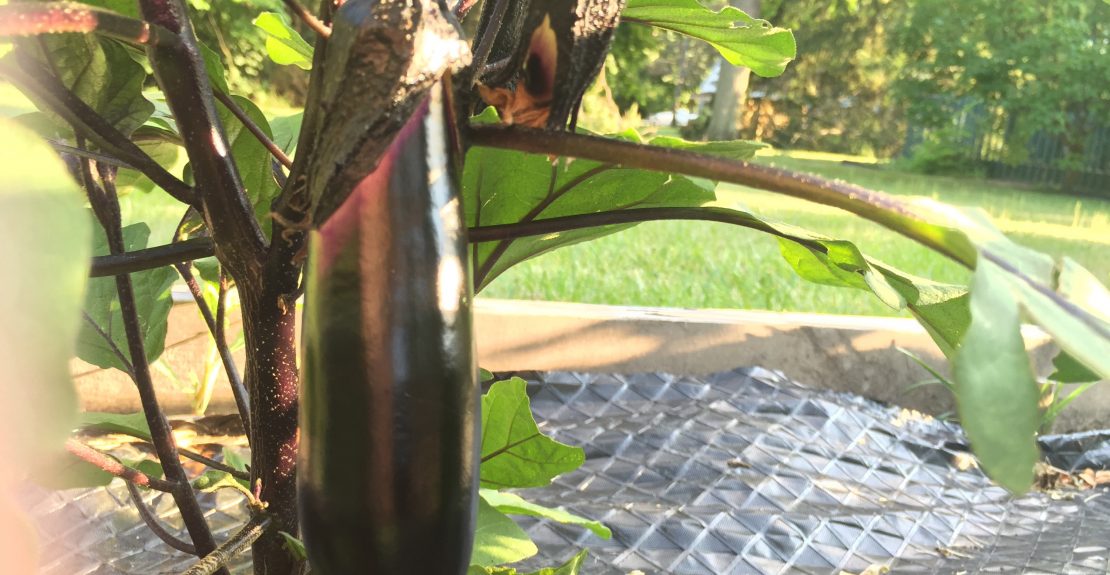 The K and J Garden is doing well here in the middle of July. We’ve had a couple of weather-related problems that we’ve had to work through over the past few weeks, but everything is growing like crazy and it’s super exciting to watch. I’m also glad we put an outdoor bench, because we were fed up working in the scorching sun. The tomatoes are coming in like woah, and the ones we’ve gotten to eat so far have been insanely delicious. Gardening has been a great daily task for me. It’s helped to frame my day and set a routine in motion. I’ve also been taking a lot more pictures in general because of the garden. Wanting to snap photos of the way that the plants are changing every day has been a great reminder of how much I love taking photos. It’s even got me itching to get my DSLR out and take some macro shots of these growing little fruits.

The weather here in Michigan has been insane. We got .5 inches of rain in June — normally it’s just about 3.5 inches. I was out watering the plants each and every day. It was great to help foster a relationship with each of the plants, and to help establish that daily routine of going out there and taking care of them. But man, it would have been great if mother nature could have helped out in the precipitation department. Of course, the weather pulled an absolute 180 last weekend when we got a freak-ass hailstorm that absolutely destroyed East Lansing, and knocked out our power for about 40 hours. We were running errands, finishing up at Target when the storm hit, and five minutes later the sky looked like the most beautiful day in the world.

We drove a few blocks over to Whole Foods and found out they had no power. On the way home we drove through two feet of water at some of the intersections, totally uprooted trees in the street, and multiple car accidents. I’ve never seen such a large amount of destruction from such a short storm. We got home (no power) and so I immediately when to check on all the plant babies. Luckily, none of the plants were totally destroyed by the storm and for the hailstones and uneven grass we have been using the Zero-turn mower we found on https://www.lawnmowery.com/best-zero-turn-mowers/ to fix the front lawn. There were a bunch of plants, especially the peppers, that had grown a bunch recently. They had grown some fruit in the previous week, becoming just a little bit too heavy for their stalks. A few of which had tipped over and needed to be re-mounded, covering up the exposed roots.  In hindsight, I probably should have staked them sooner to give them a little bit more support. But that’s something I’ll remember for next year. The worst of it was the bruising that some of the plants took. I didn’t notice it on the first day, but after first twenty-four hours had passed, I noticed some round spots on both the fruit and the stalks of the plants. At first, I was a little bit worried it was a disease of some sort, but upon further inspection, it turned out to be big-ass bruising from the hailstorm.

When I went around to the other plants, some of the fruits had pieces that were totally sheared off by the hail. I spent a little bit of time pruning the damaged plants and by the end of the week they’re all looking really great again. Seriously. After we were done scarifying, we started out the season with twelve tomato plants and an additional four tomatillo plants in tiny little pint size planters and now we have the beginnings of a tomato jungle — and it’s only July. Last year our last tomato harvest was in late September, so I’m really excited to see where these plants go over the next few weeks and into the end of the summer.

So because these plants started fruiting well before any of the others, they didn’t get a chance to grow as large and as strong as they should have. The plant didn’t have enough time to grow big leaves to capture sunlight, or to grow tall enough to sprout additional leaves. Which meant that when the fruit started coming in too early, all the energy was focused there, instead of into growing larger and stronger. But that’s okay, I still got a round of fruit out of all the damaged plants, and we have a dozen more plants growing.

A lesson I’ll have to remember for next year — if I start to see fruit too early, nip it in the bud — quite literally. We’re coming up on the really fun time in the garden. I love watching each day for each fruit to turn the right color, and feel just right. So far this year we’ve harvested and used:

What we’ll be harvesting in the next few weeks:

It’s a weird thing getting used to going outside in the backyard and picking out food to eat/cook immediately. It’s insane how much better things taste when they come out of the ground so close to the dinner table. We get most of our produce from two local CSAs that we participate in. This garden has been really great to supplement our favorites, especially tomatoes which I can never have enough of. Thanks for following along on my 2016 summer garden journey. Scroll through the gallery at the top of the page for additional photographs of our mid-July update. The K and J Garden is our backyard garden at our home in East Lansing, Michigan. I post additional garden photos under the hashtag #kandjgarden on all the social media sites — especially instagram.

Read about A Affordable Tree Experts to know more about the best tree services in town, since it is necessary to keep such services handy is one intends to have a great garden.