Why I Needed a Game of Thrones TV Art Journal 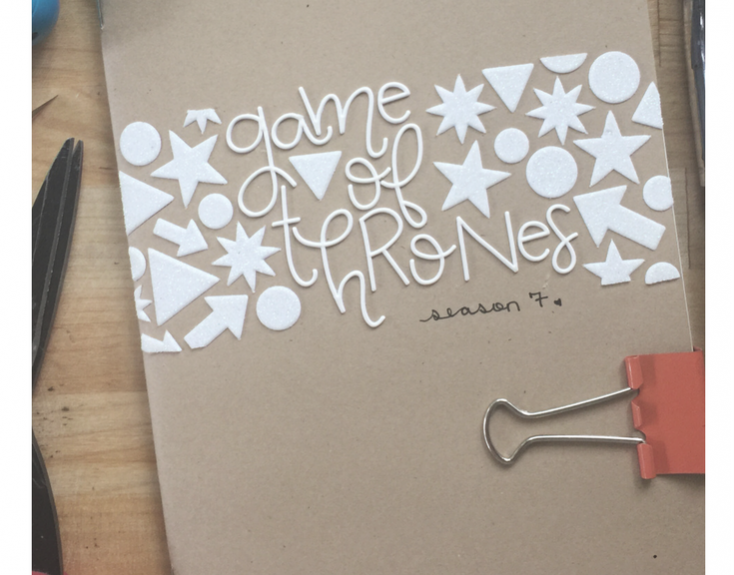 Uncertainty makes me nervous.  I like to know what’s going to happen. Or, at the very least, have a solid grasp of where things are going. For the last year, I’ve been re-watching Game of Thrones (as I do), knowing everything that has happened up until this point. There was no uncertainty through any of my watch-throughs. I didn’t have to be concerned for anyone’s safety or lives; I already knew who was dead and who still remained.

Until last night. As we were all gearing up for the Season 7 premiere, I was getting super anxious. There are still a ton of moving parts, and we’ve only got thirteen episodes left total. Some people are going to have to die. No, that’s not true. A lot of people are going to have to die. Just thinking about the uncertainty of who was going to die, how they were going to die, what this was going to mean for everyone else. It got to be a lot. So I knew I needed a small coping mechanism for actual showtime. To help me deal with the stress of watching the first new episode in over a year, I created a new television journal. It’s made out of a traditional blank traveler’s notebook. I’m keeping it super minimal, I’m not really looking to spend all that much time on this project outside of Game of Thrones episodes.

Here’s what I did add to the album: I decorated the cover with some Freckled Fawn letters and glitter stickers. I left the front inside cover blank for now (idk what I want, but I didn’t want it to have to do with episode 1). I used my ATG adhesive gun to adhere two inside pages back to back. This makes them sturdier and gives me fewer pages to work with. Since there are only seven episodes this season, I definitely won’t be using all 32 pages. While the show was on, I needed a creative activity that I could be doing with my hands while still keeping my eyes glued to the screen. That’s where hand-cutting/fussy cutting letters came in. I decided that I would go with the episode title, and cut my letters out of book paper that had been watercolored over it. This paper had been colored black, which was perfect for the Dragonstone episode. For next week’s episode, I’m thinking I’ll use dark blues on my paper. I don’t know if I’ll do any more than this. I may come back to this journal after the season is over and write some theories, questions, notes, etc, inside; or I may just leave it just as it is. If you’re a huge Game of Thrones fan, you should join us at The Awesome Ladies Project in our Game of Thrones forum. Tell us your favorite characters, talk about the latest episodes, and more.