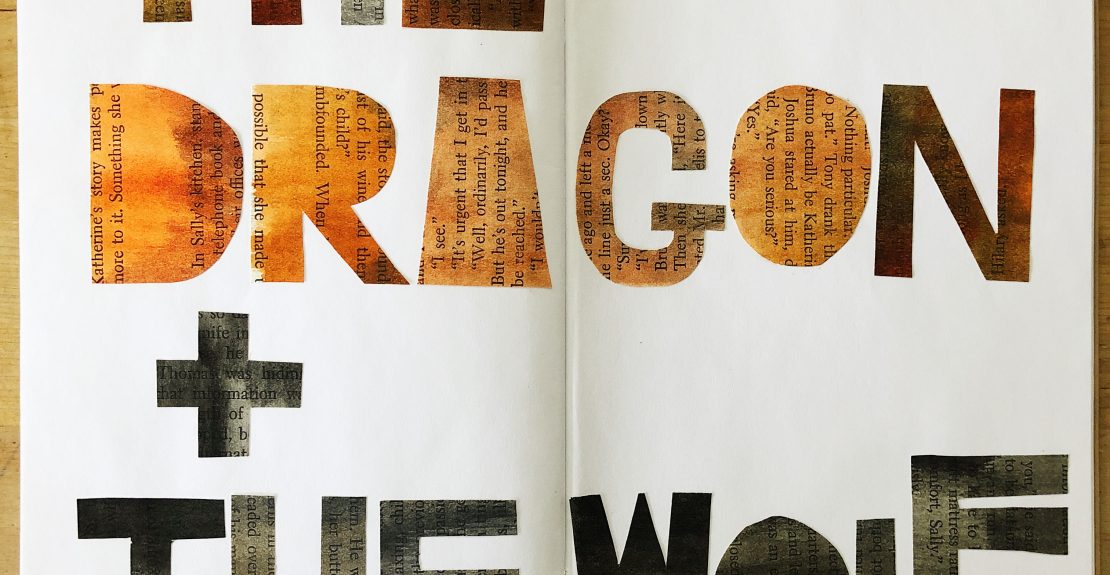 Episode Seven: The Dragon + The Wolf

I love television. Television is my favorite method of taking in stories. Over the past ten years, we’ve been blessed with the greatest epic fantasy series on television: Game of Thrones.

Today I’m sharing the art journal that I created during Season 07 of the series. The purpose of this journal was so that I could keep my anxious hands busy while I watched the first run of each episode. I needed a project that could keep my hands moving while I kept my eyes on the screen.

This journal was created in a standard size travelers notebook. I adhered two sheets of paper back to back to give myself sturdier pages. I also made sure I had a page for each of the seven episodes.

Before each episode, I watercolored several sheets of book paper with the same few colors of watercolor paint. I made sure to watercolor way more sheets than I needed. The last thing I wanted was to run out of watercolored paper in the middle of the episode.

I decorated the cover with some stickers. White alphabets and white glitter icon stickers. Putting everything in the upper middle third of the page. I journaled a little *season 7* with black pen underneath the block.

Each episode got its own page and I did a little bit of pre-work for each episode.

It was really awesome to make progress on and technique that I had never worked on prior to this notebook. When I’m working in my scrapbooks, I’m never looking for a title that takes me an hour to cut out by hand. That’s absolutely not my style. But this felt simultaneously indulgent and simple.

It was great to be able to keep my hands busy while I was watching the show and wind up with this cool fan-art. I also love that I was able to create something meaningful to document Game of Thrones time without spending any extra time during the week talking about what I think or feel (even though I thought and felt SO much). I could just leave it at these awesome episode pages and be content.